“It took a production team of two photographers and two videographers to capture Jacob and Irina’s Jewish wedding, and the results are breathtaking!”

Irina and Jacob’s “big day” truly was a big day! 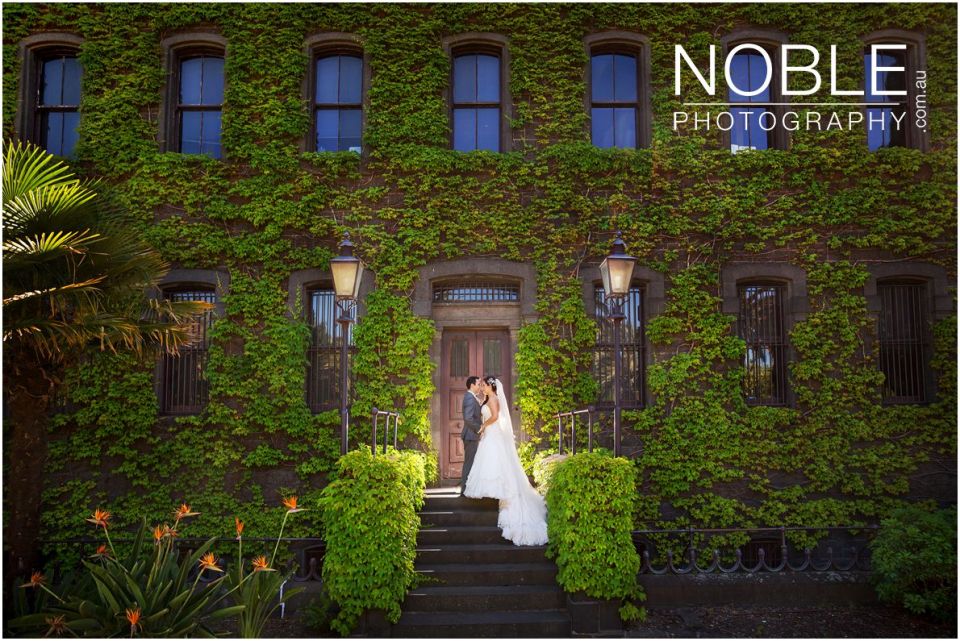 Our three- part photography and film crew were welcomed into Jacob’s home by his mother, Zara, to find Jacob and his groomsmen decked out in matching “team groom 2014” t-shirts. They changed into their wedding attire, and Noble Films recorded Jacob saying some lovely words about his soon to be bride, Irina. It quickly became clear just how very much he adores Irina, as he told us just how excited he was to spend the rest of his life with her. 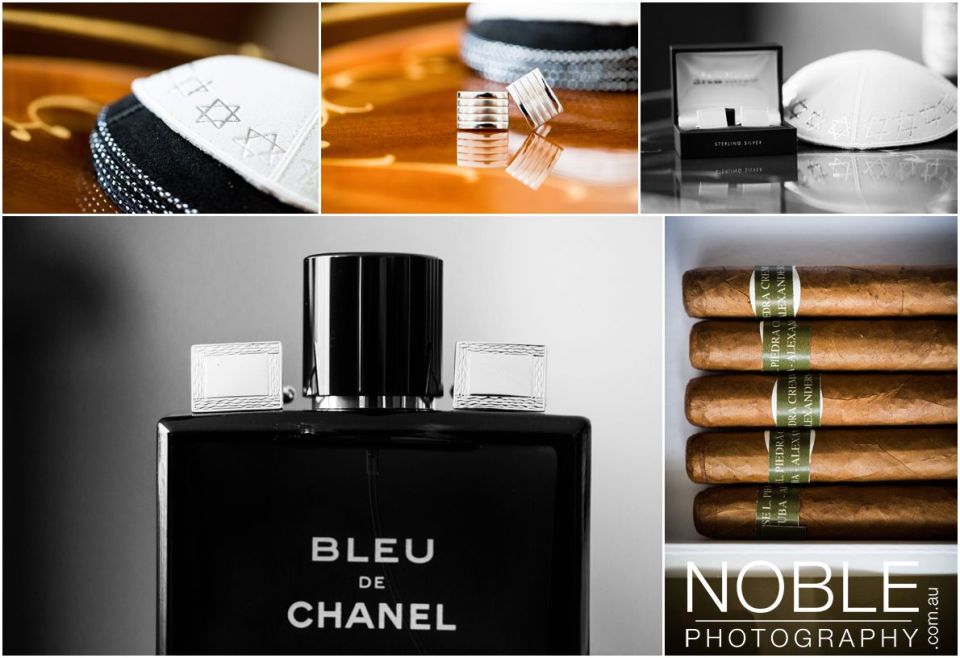 We filmed and photographed Jacob opening a surprise pre-wedding gift of Chanel cologne given to him by his bride-to-be, Irina.

We departed from Jacob’s house with handfuls of home made cookies generously given to us by Zara (and they were delicious!). It is clear that both Irina and Jacob are very close to their families, and relatives from both sides were incredibly kind and accommodating to us.

Jacob and his Groomsmen

Irina’s day began at around 5am, when she was greeted by her hair and makeup artists to start preparing for the wedding day. When we arrived, she was a little sleepy from the early rise, but that was far outweighed by her excitement for the day ahead. As our Noble Films videographer filmed her bridal details, I photographed her gorgeous wedding dress that weighed a whopping 15kgs! The gown was intricately detailed with jewels and layers of delicate material, with a train that reached the floor, even when it was hung up over the door. 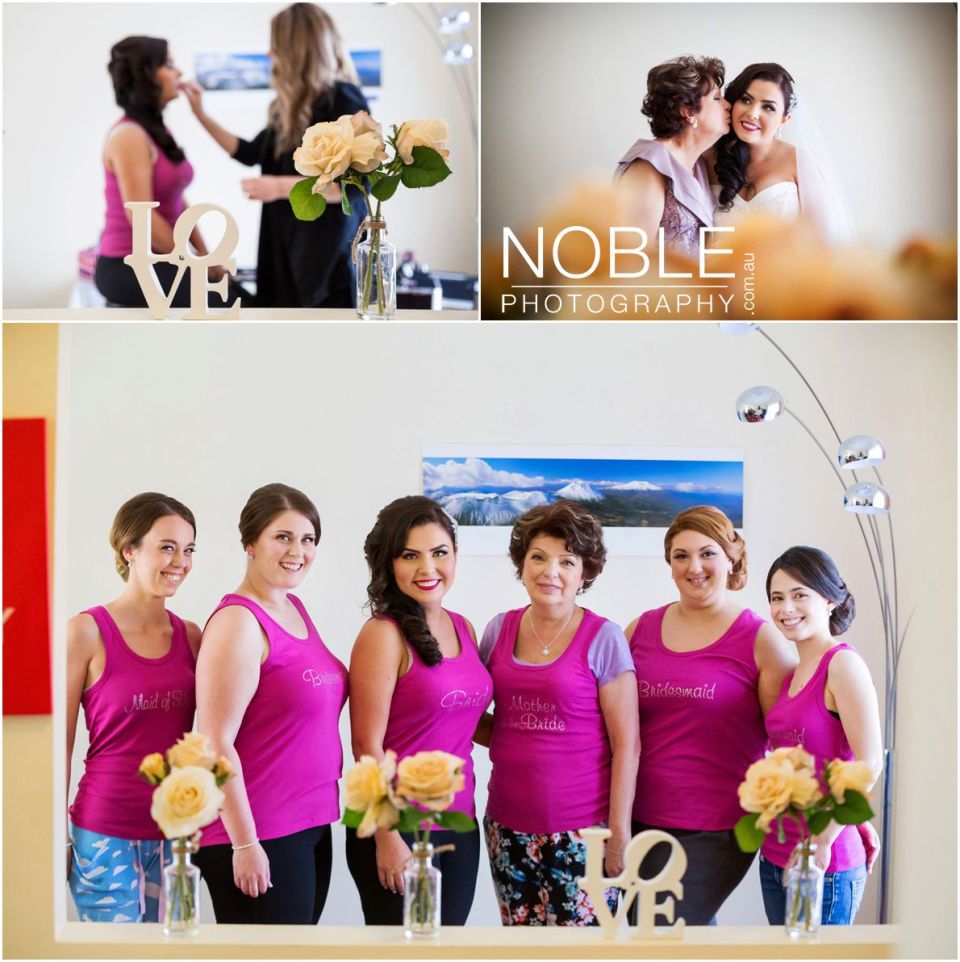 Irina with her mum Dina and Bridesmaids 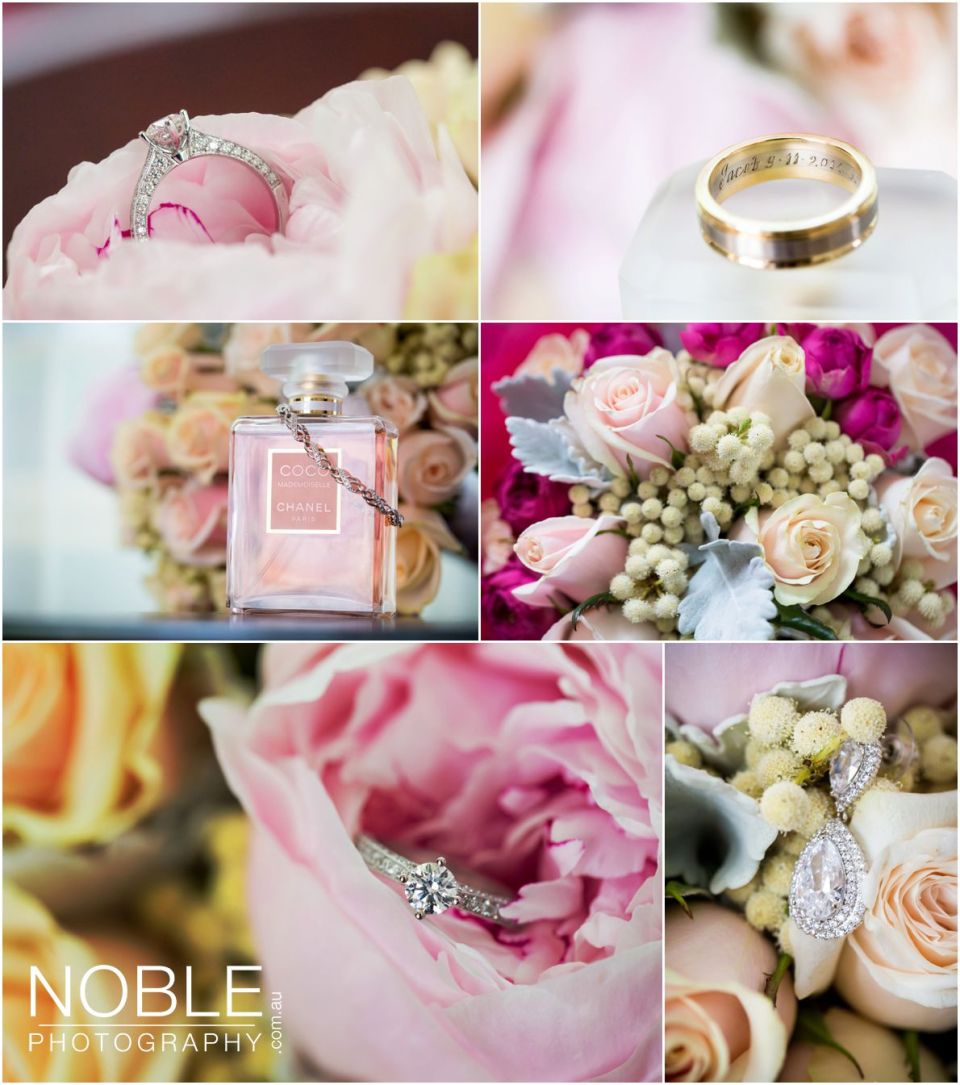 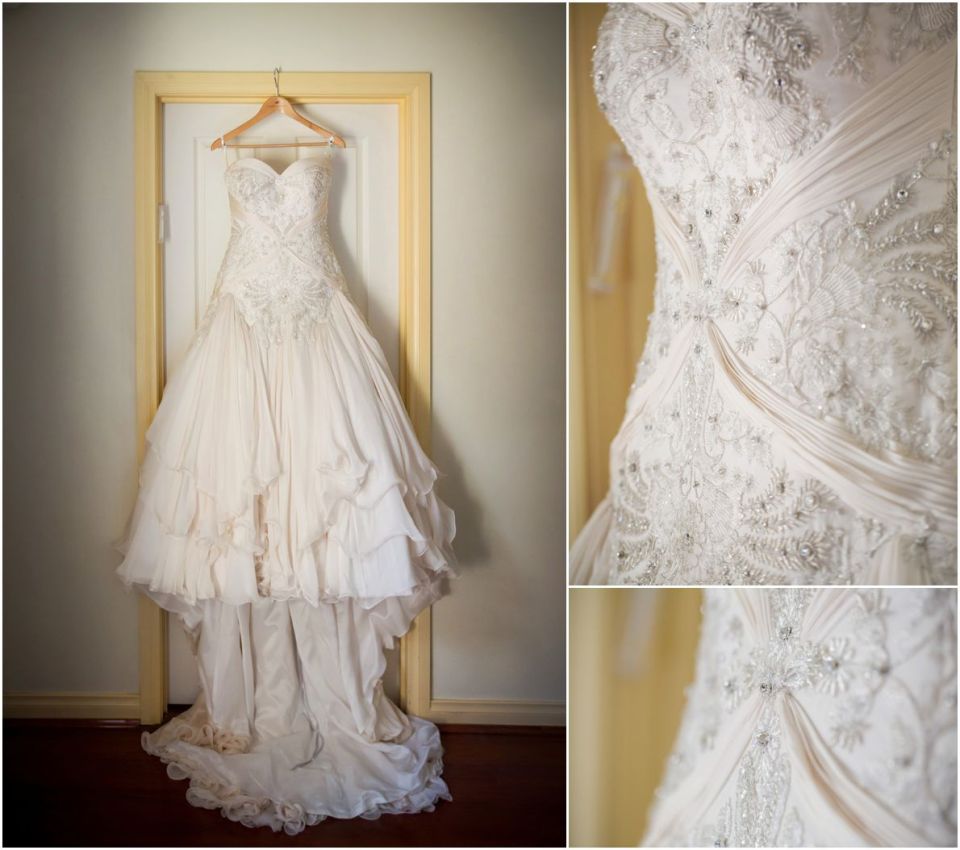 After filming and photographing Irina, her mum Dina, and her four bridesmaids, it was time for Irina to get changed into her bridal gown. It was then that the nerves began to set in. These were soon turned to excitement as soon as I mentioned Jacob’s name, and in no time she was smiling and giggling every time myself and Noble Films’ videographer mentioned his name.

Nerves turned to excitement as Irina put on her gown

The beautiful bride Irina couldn’t wait to marry the love of her life, Jacob 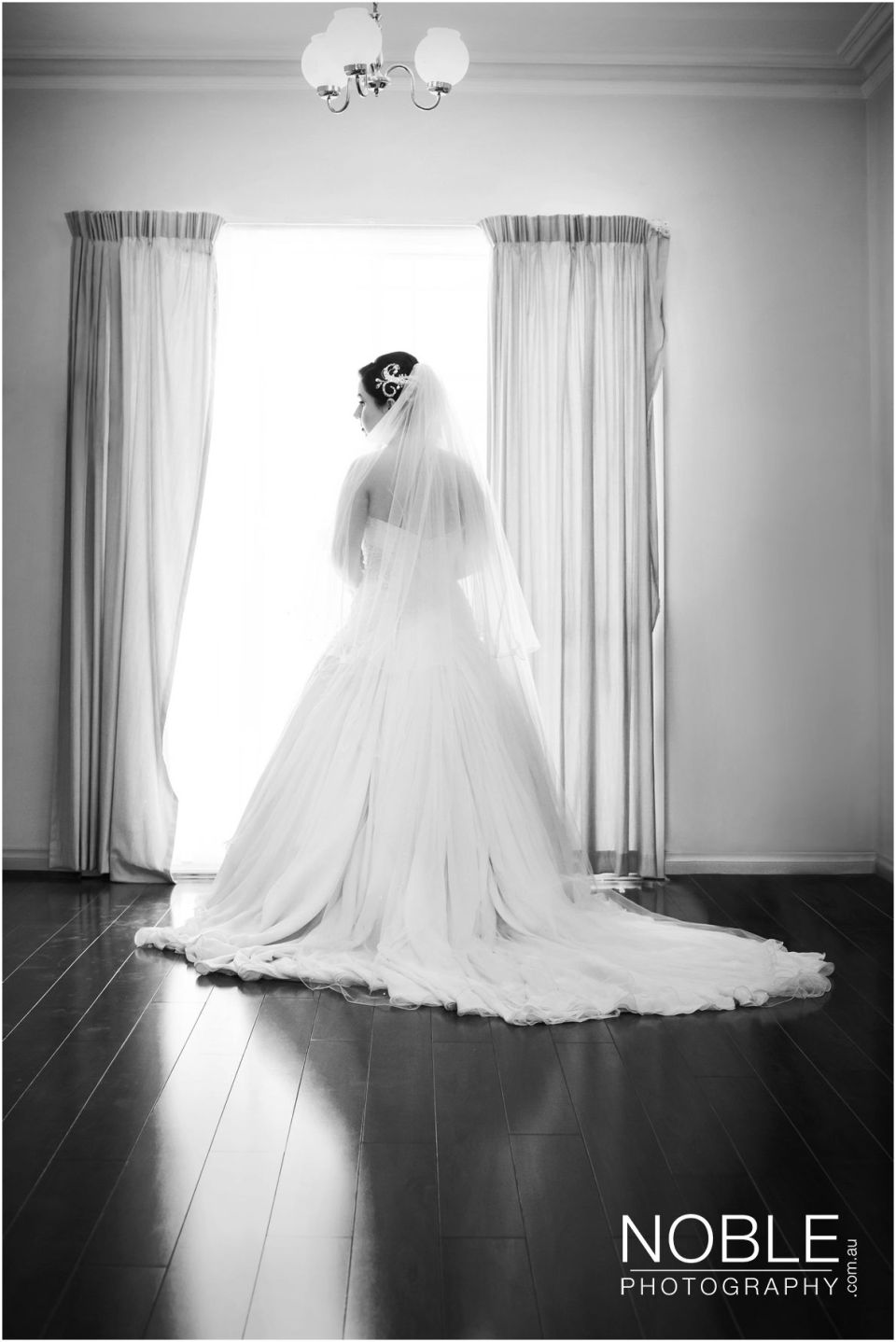 A back shot of Irina in her wedding dress

After some more photos and filming, we left the girls to finish getting ready (once again with handfuls of delicious homemade snacks), to head to the Royal Botanical Gardens Melbourne, where the traditional Jewish Wedding was to be held. We were joined here by a second videographer for Noble Films, completing our four part photography and videography team to capture every moment.

It was a beautiful, sunny spring day with not a cloud in the sky, and a Chuppah was set up for ceremony. A violinist played traditional Russian Jewish music, as friends and family gathered onto the green lawn of the gardens.

As the stretch limousine came down the Botanical Garden path, Jacob smiled in anticipation for his soon to be bride to step out. I snapped a few shots of Irina and her mother Dina inside the limo, before she emerged with a huge smile on her face. Their hundreds of guests were all standing, smiling and snapping photos of Irina, but she only had eyes for Jacob. As Irina walked down the aisle, Jacob was beaming from ear to ear, and guests took their seats as the couple joined hands beneath the Chuppah to begin their marriage ceremony. 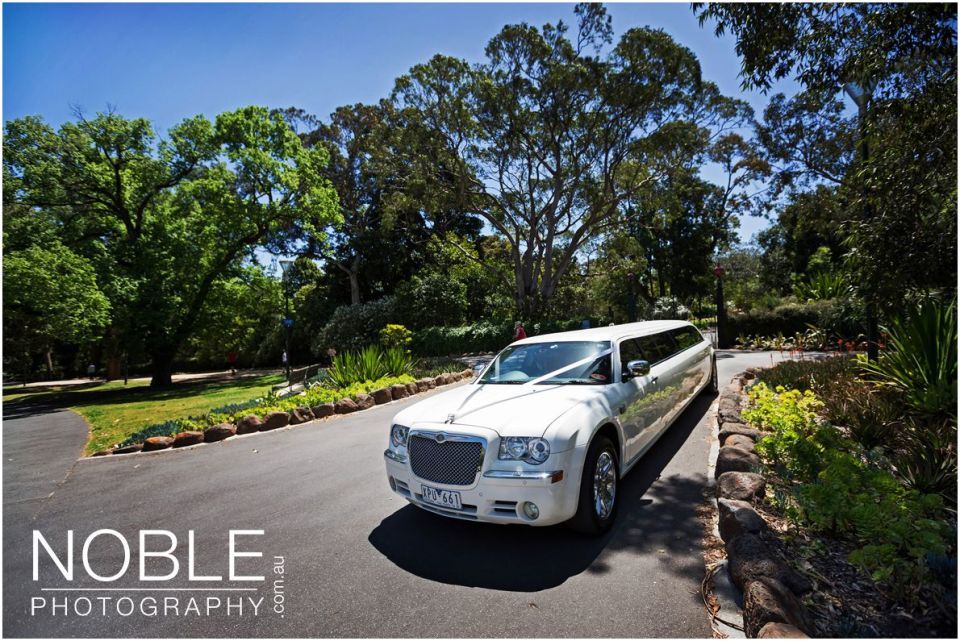 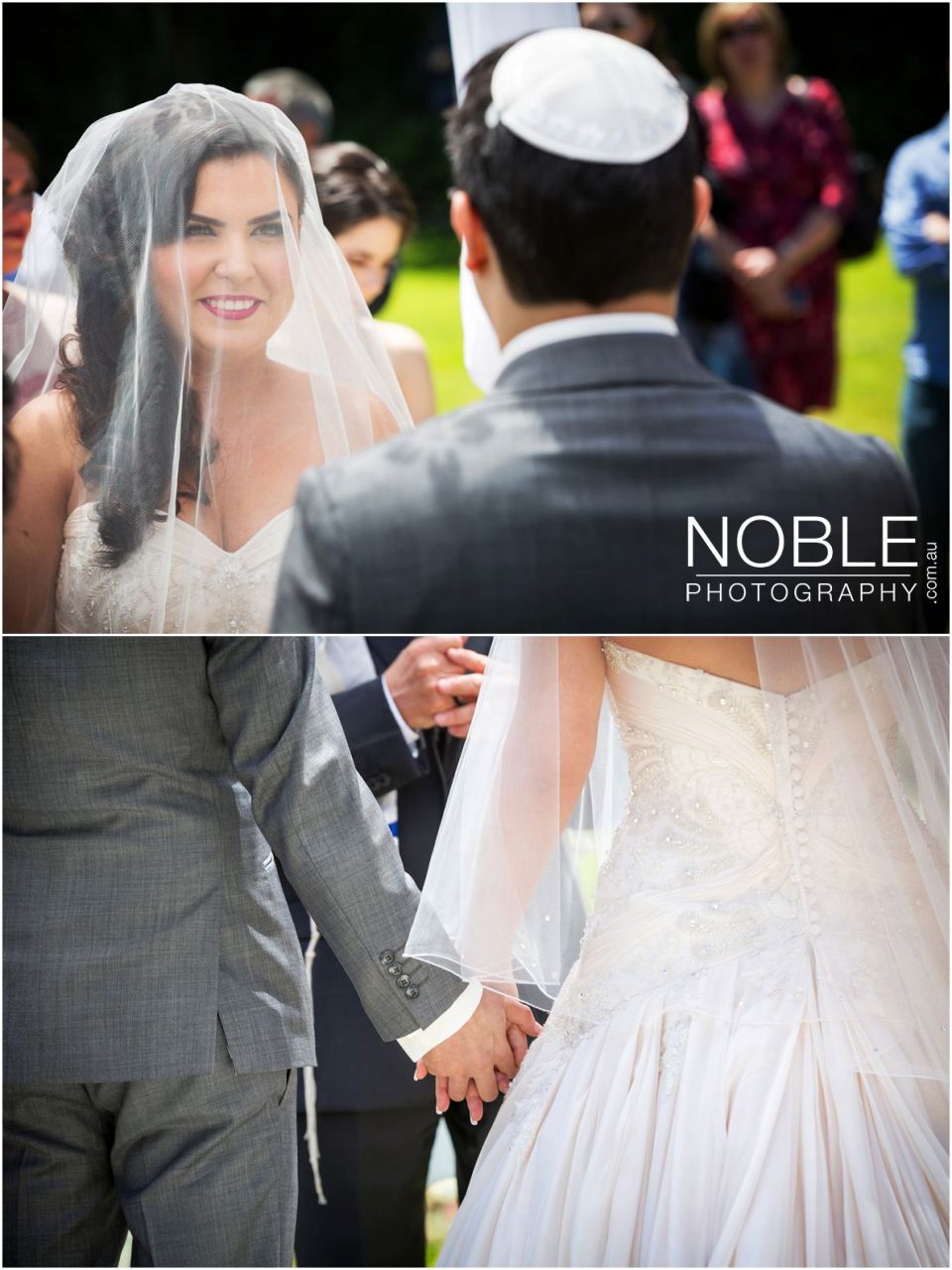 About to be married!

With four photographers and videographers, we didn’t miss a moment of Jacob and Irina’s Jewish Ceremony

The ceremony was beautiful, complete with traditional Jewish customs including the Rabbi and family members reading seven blessings to the couple in Hebrew. Jacob completed the ceremony by breaking the glass, which was followed by calls of “Mazel Tov!” by family and guests.

The wedding took place in the beautiful Melbourne Botanical Gardens 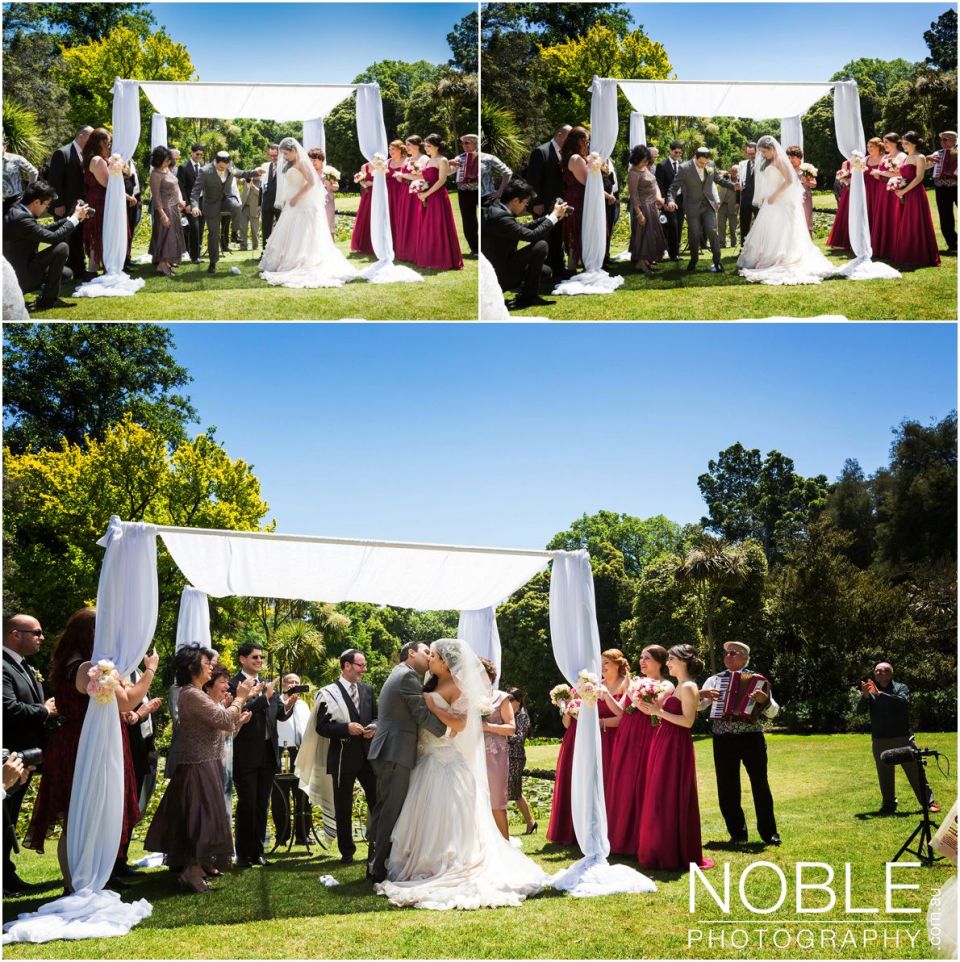 Breaking the glass and first kiss!

Mazel Tov to the happy couple!

Friends and family congratulated Irina and Jacob, and after signing the marriage contract, a group photo and some family time, we left to take some location photos around Melbourne. We didn’t have to travel far as across the road was Victoria Barracks, a perfect location for some romantic photos of the newlyweds.

A few location photographs at the Gardens 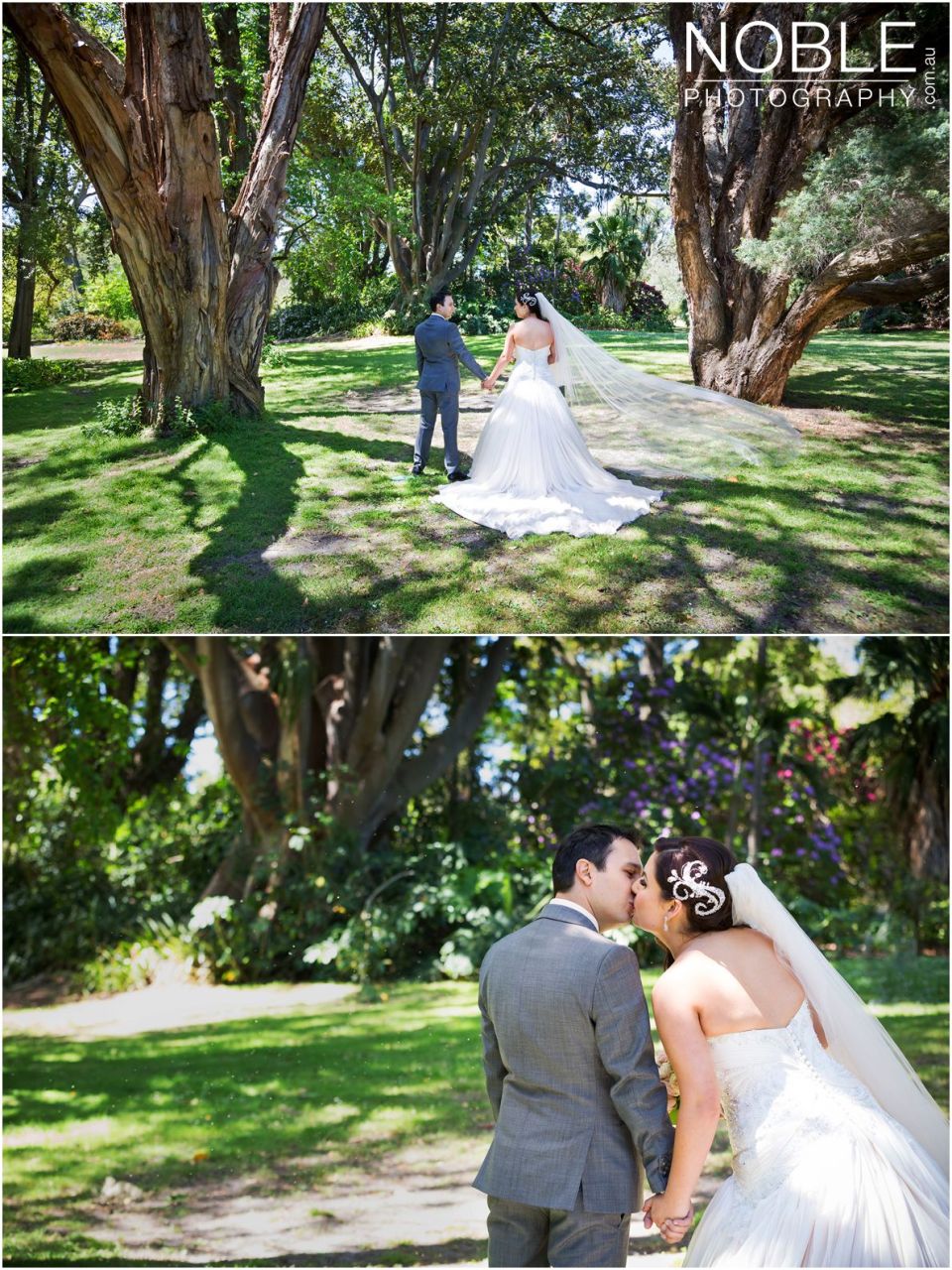 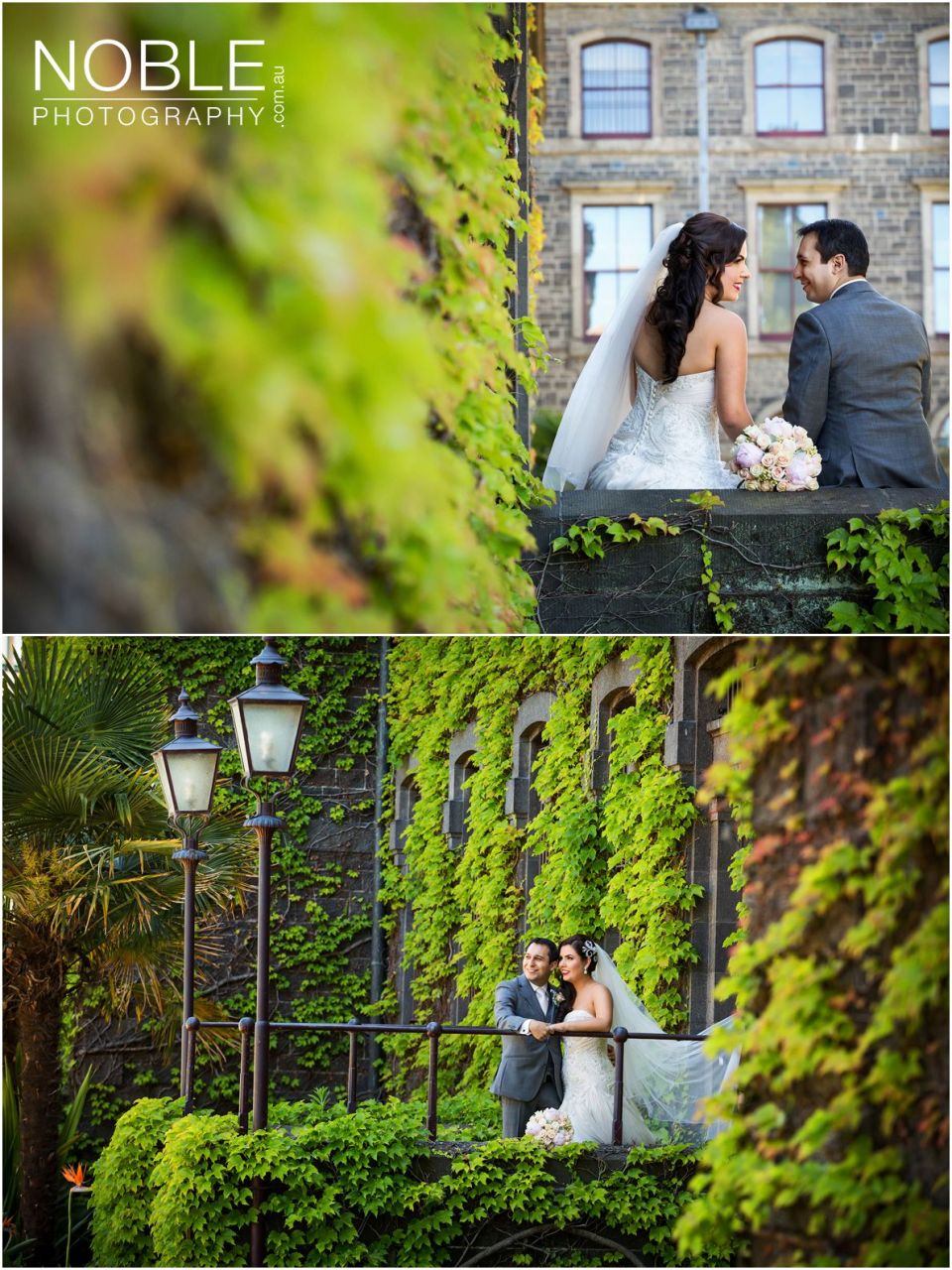 We went to some “GREAT Melbourne Wedding Photography Locations” 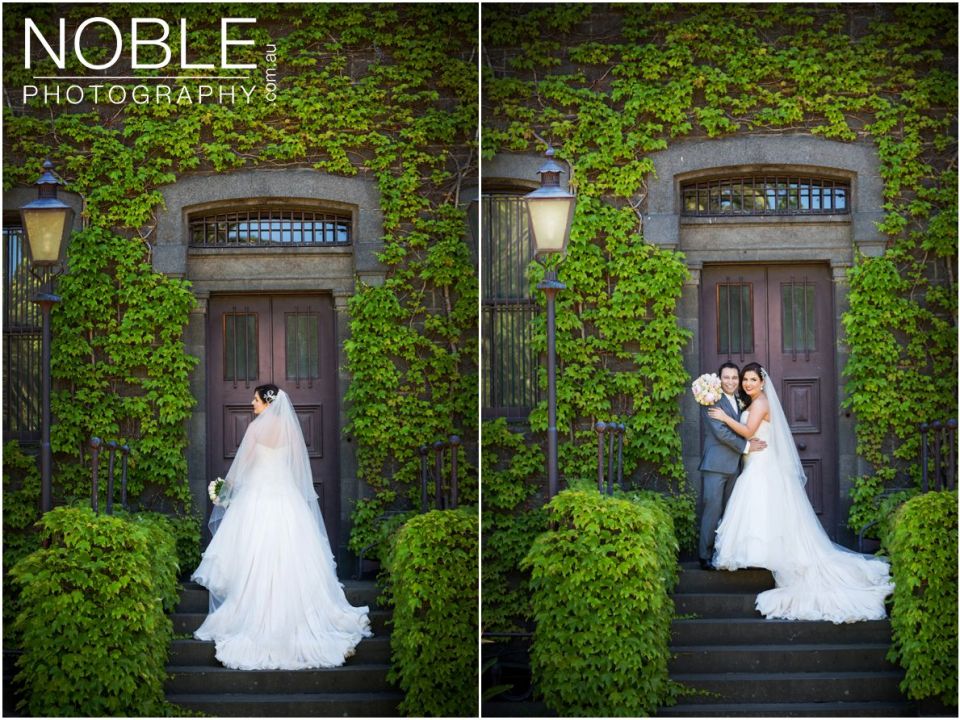 Some photographs more on the beautiful steps 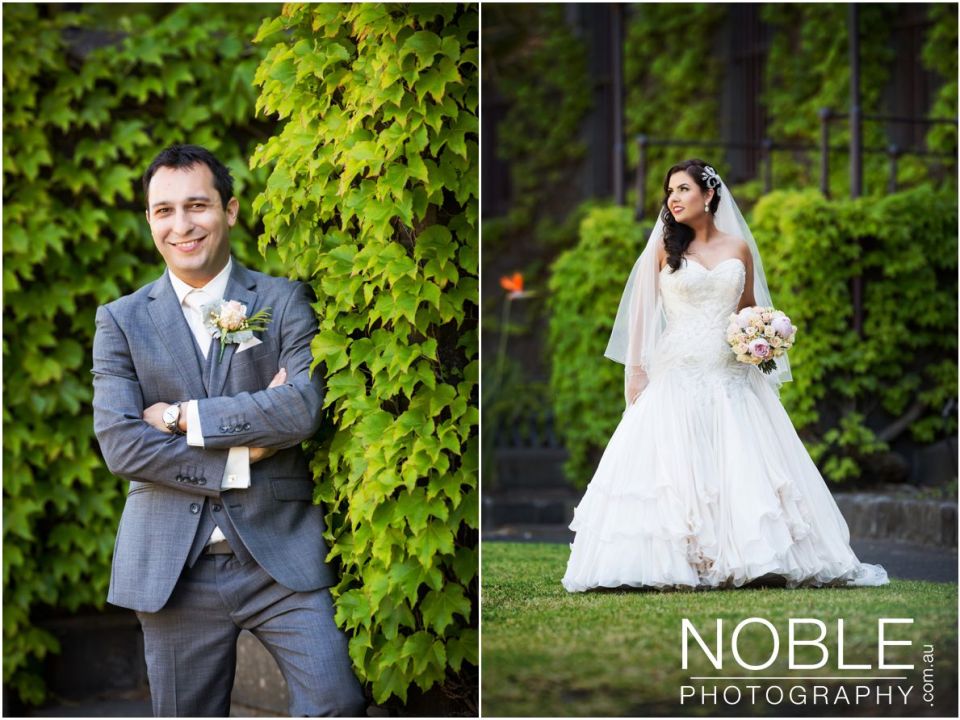 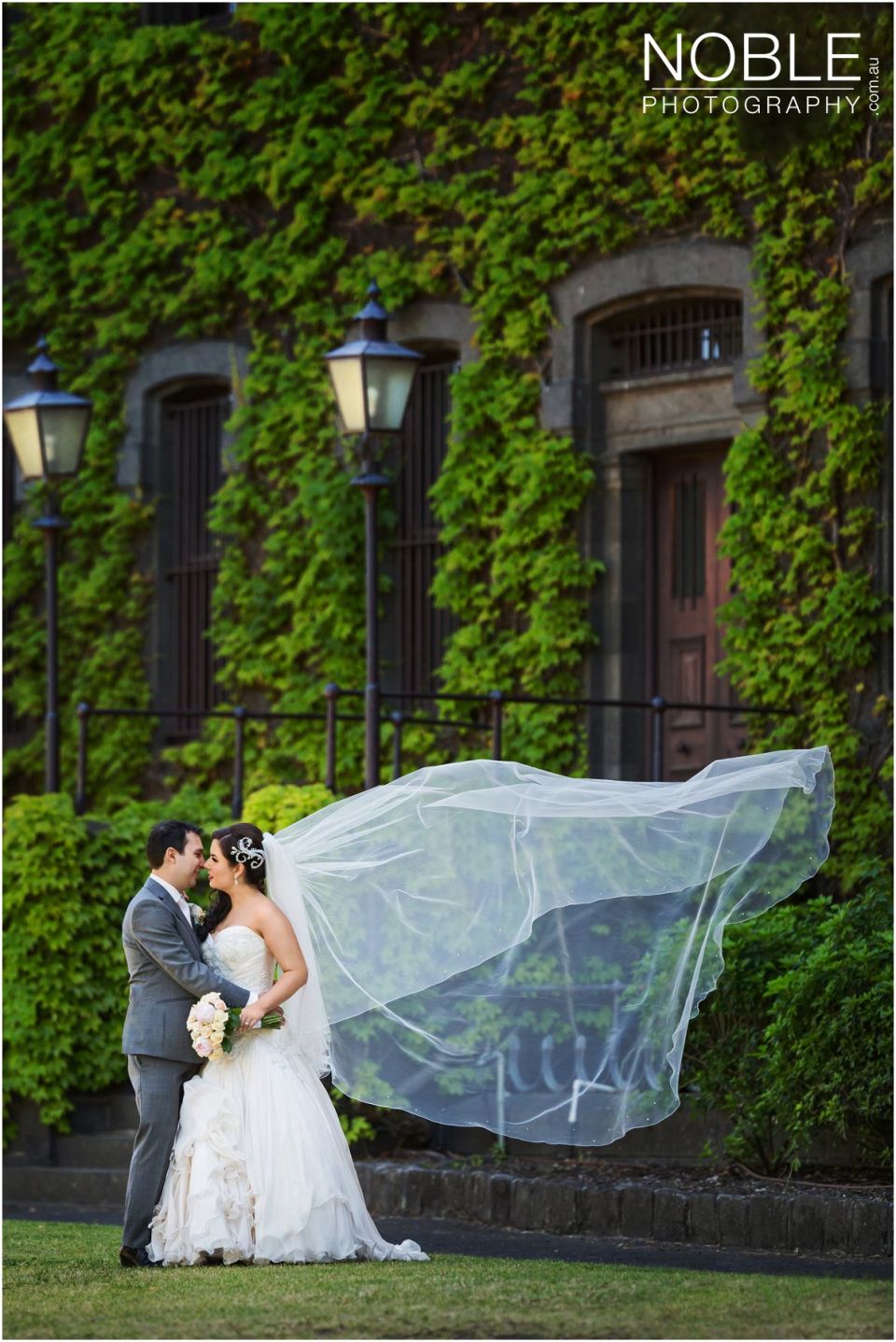 Our next location was the Langham hotel in the heart of Southbank, Melbourne. I used flash to create a striking composition of Irina and Jacob on the grand staircase, whilst Noble Films captured the couple embracing on film.

Photographs taken at the entrance of the Langham

A few photographs later, we headed to Leonda by the Yarra, a beautiful location where Irina and Jacob were to have their wedding reception. The couple were very impressed with the beautifully decorated room, with lots of flowers and an amazing rose garden centrepiece hanging from the ceiling above the dancefloor. Our melbourne videographers  filmed the couple practicing their first dance, as I photographed the floral details that were perfectly complemented by the vast windows looking out over the tree-lined Melbourne Yarra River, matching the garden wedding theme. 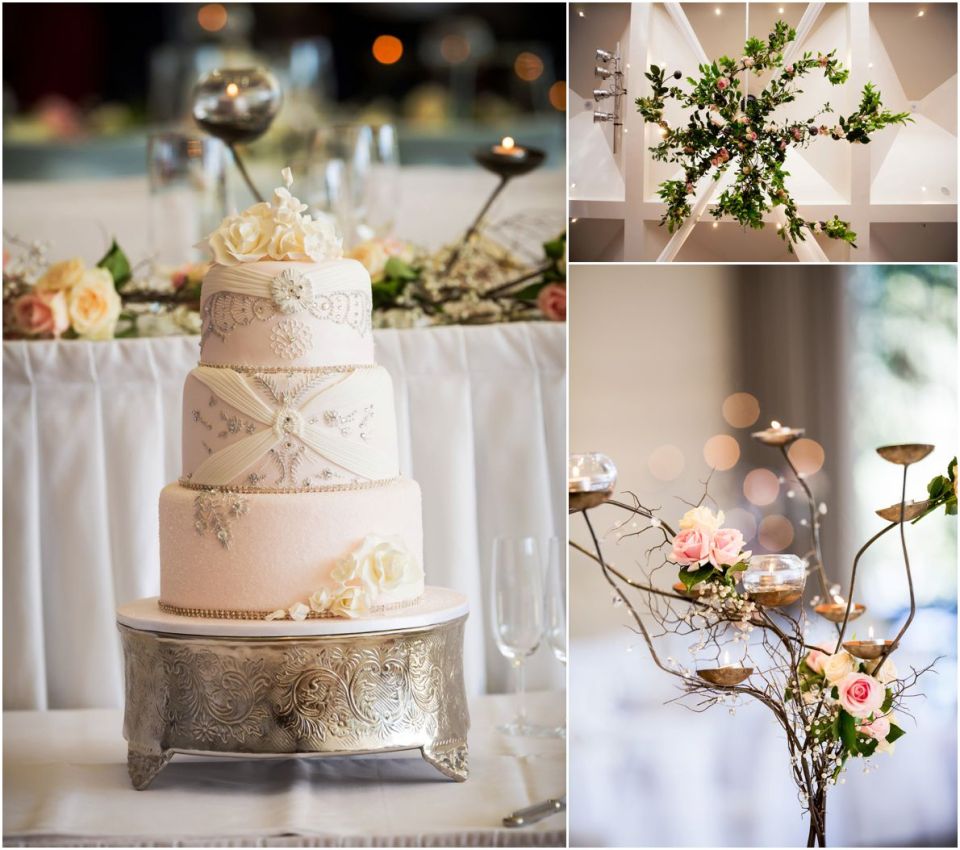 Leonda by the Yarra table details

The food at Leonda was amazing!

We then walked outside and utilised the golden light of the setting sun to create some romantic compositions of Irina and Jacob, the luscious green foliage of the gum trees and Australian natives that lined the Yarra River. The newlyweds needed no posing or direction, as they embraced arm in arm, gazing into each others eyes. 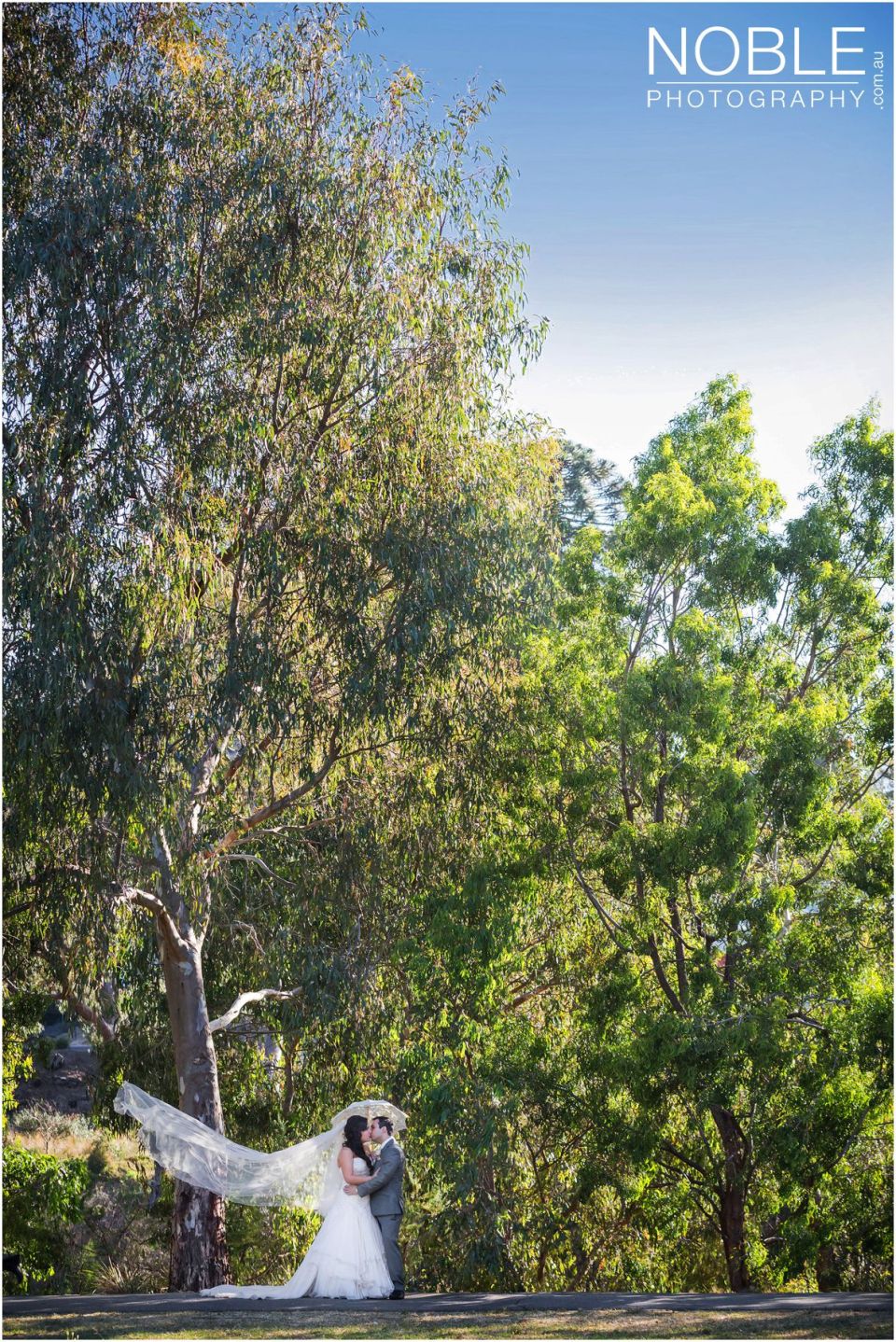 The gumtrees at Leonda were the perfect backdrop for some location photographs!

Jacob and Irina took a romantic stroll by the river 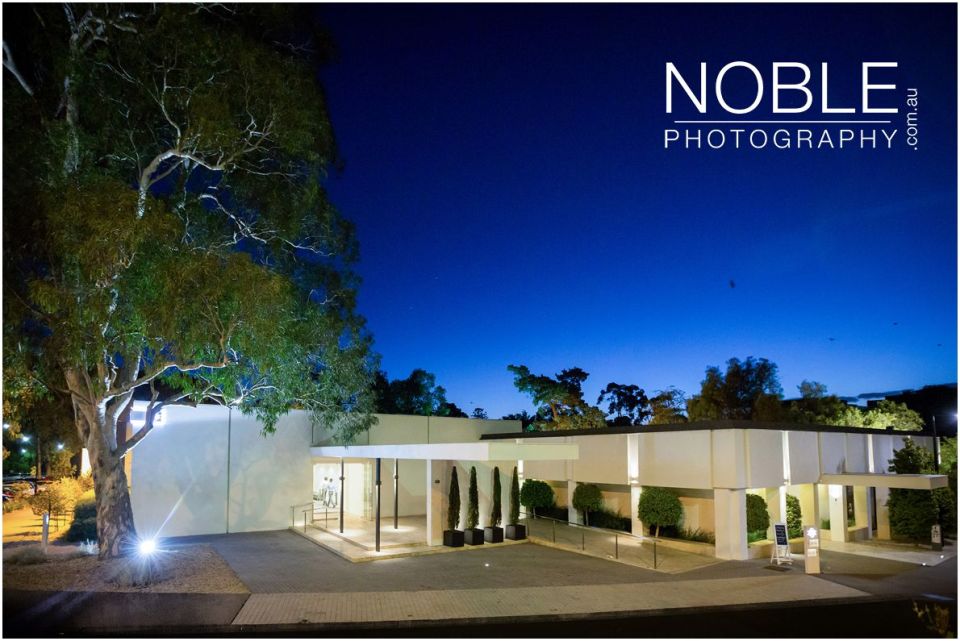 Leonda by the Yarra Wedding Reception

The wedding reception was a joyous and fun filled occasion, which was kicked off by the bridal party entering the room, soon joined by every single guest on the dancefloor. As part of Jewish wedding tradition, the couple were hoisted on chairs into the air by their guests; a moment which was captured both photographically and on film. 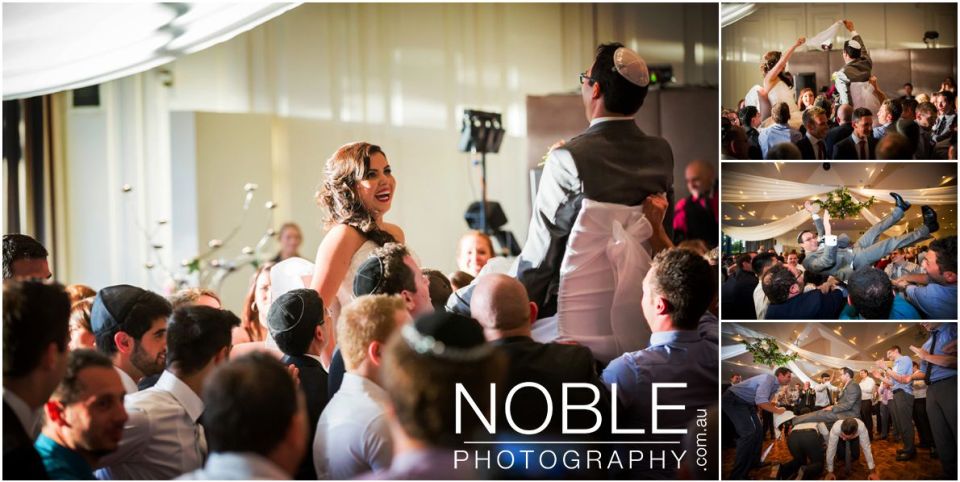 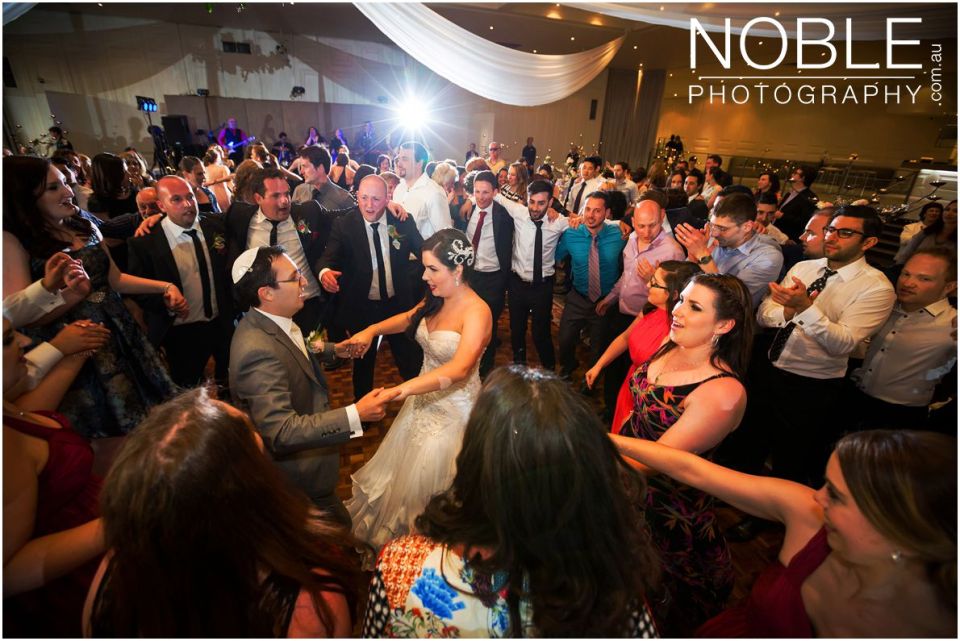 Guests formed a circle around the couple as they danced 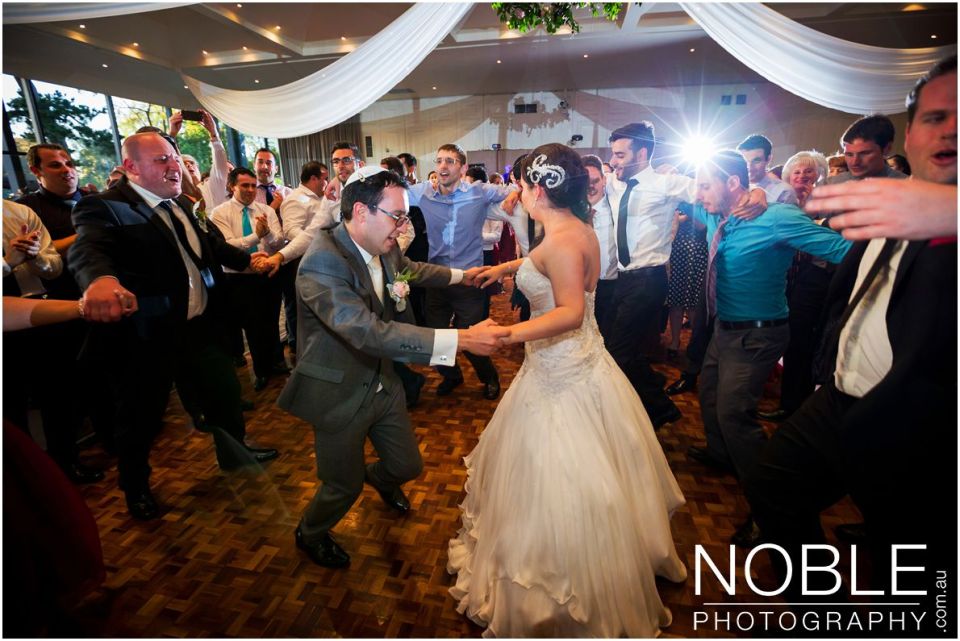 The newlyweds’ first dance was followed by spirited dancing from all of the guests that continued throughout the entire reception. This included exchanging of costumes, hula hoops and even a skipping rope; all elements of a traditional Jewish wedding. To continue the fun, the bridal party had put together a surprise performance for the couple, in which they re-enacted Irina and Jacob’s love story. They dressed up and acted their first encounter, whilst some of the bridesmaids sang a dedication to the newlyweds. 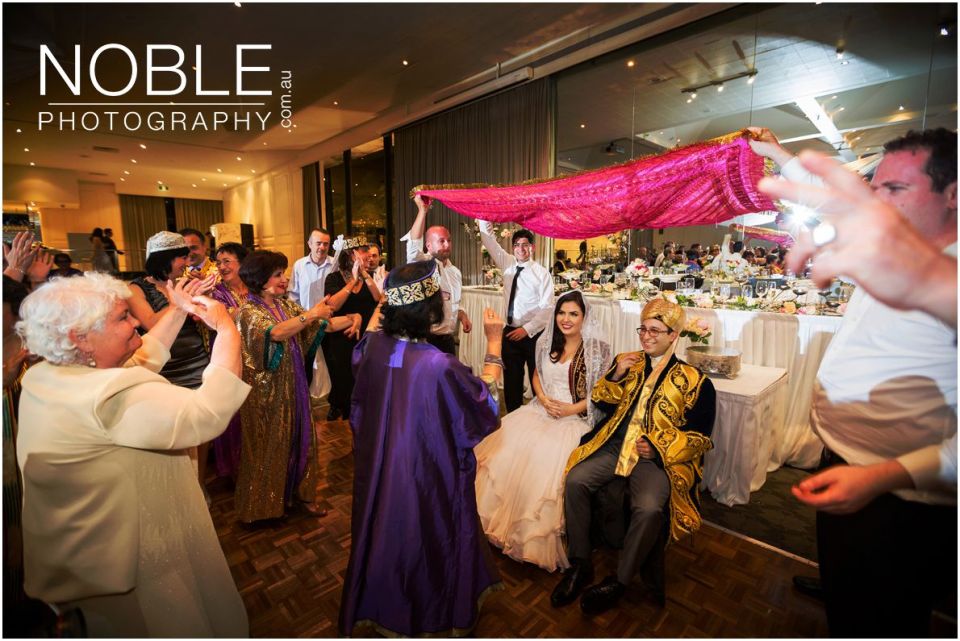 The reception was filled with costumes and traditions 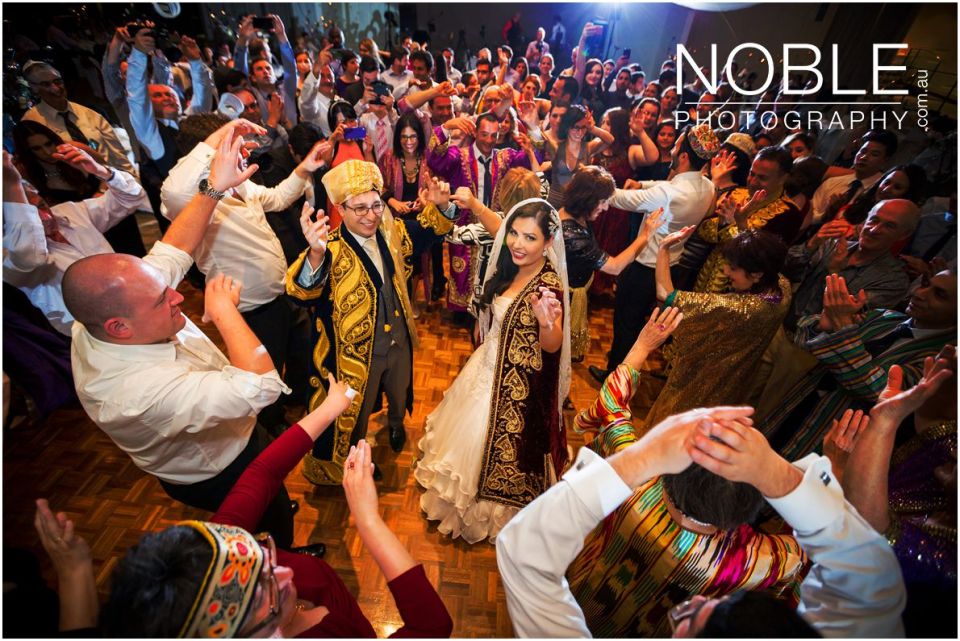 Everybody had fun dancing in traditional costume 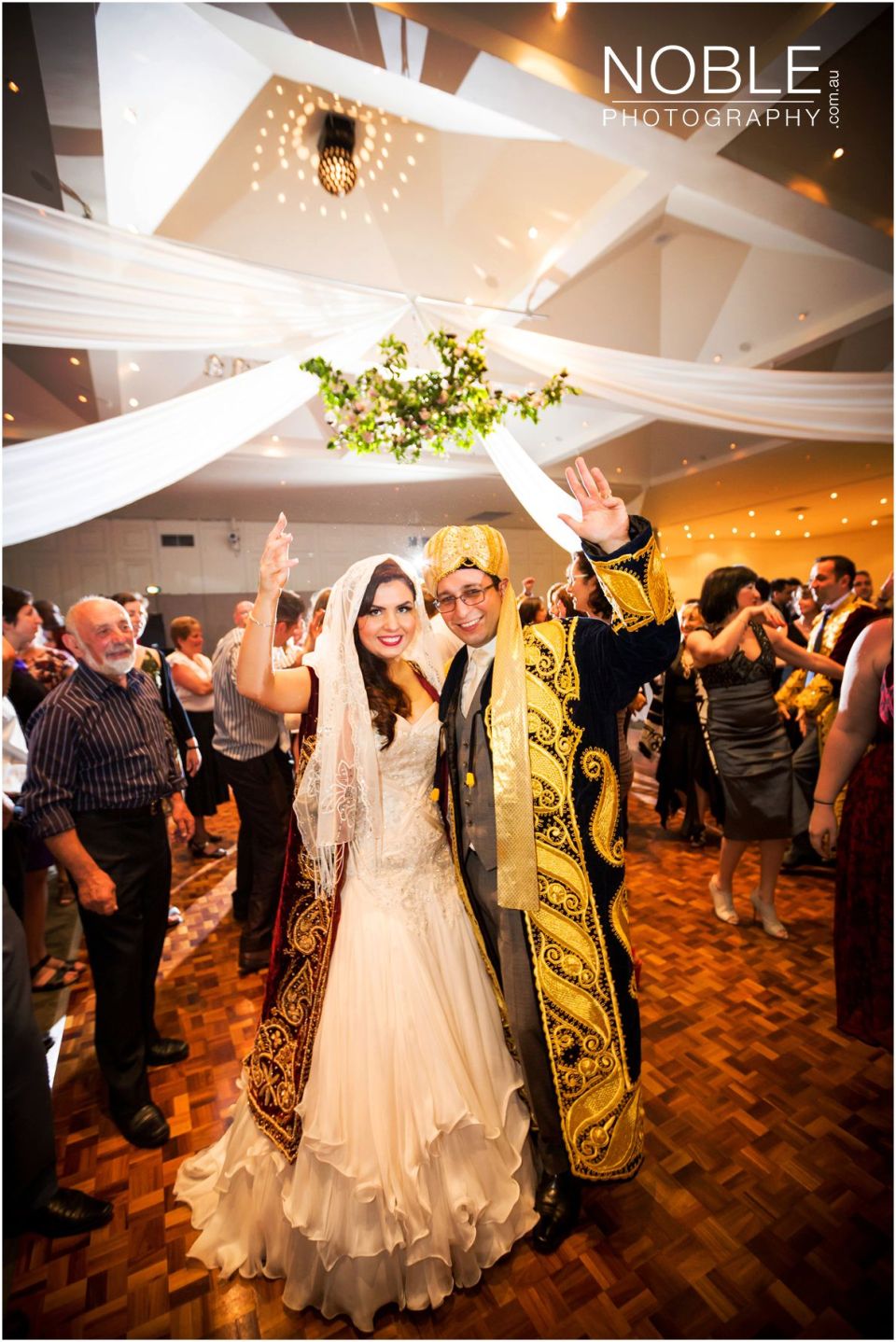 Jacob and Irina in costume 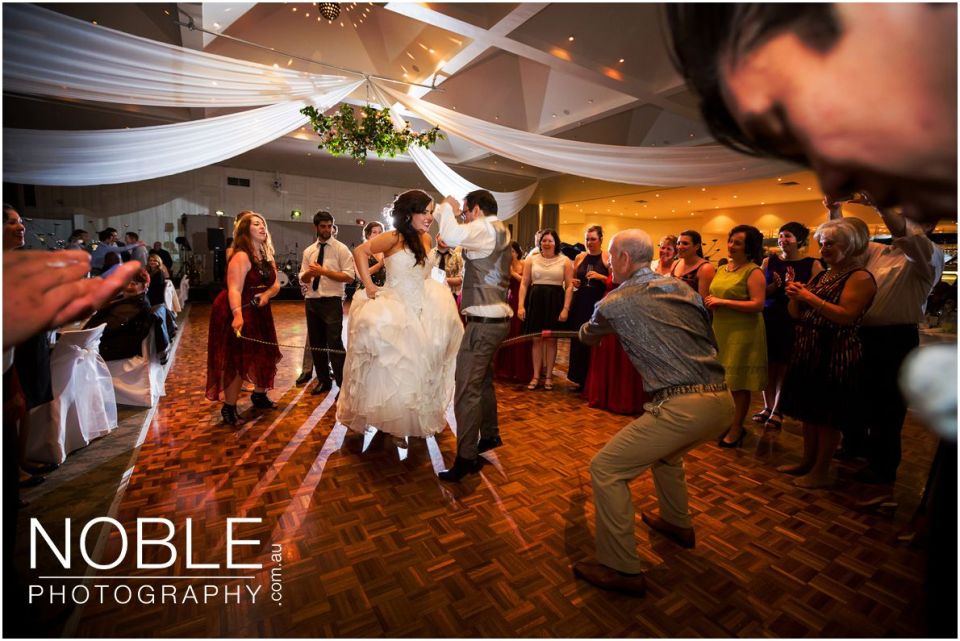 The newlyweds skipping together

Considering it was such a long day (our photography and video coverage was 18 hours alone!), before we knew it it was midnight, and time for the newlywed couple to farewell their guests and begin their new journey together. They left in style, heading down the steps of Leonda Reception to a boat awaiting them on the Yarra river. 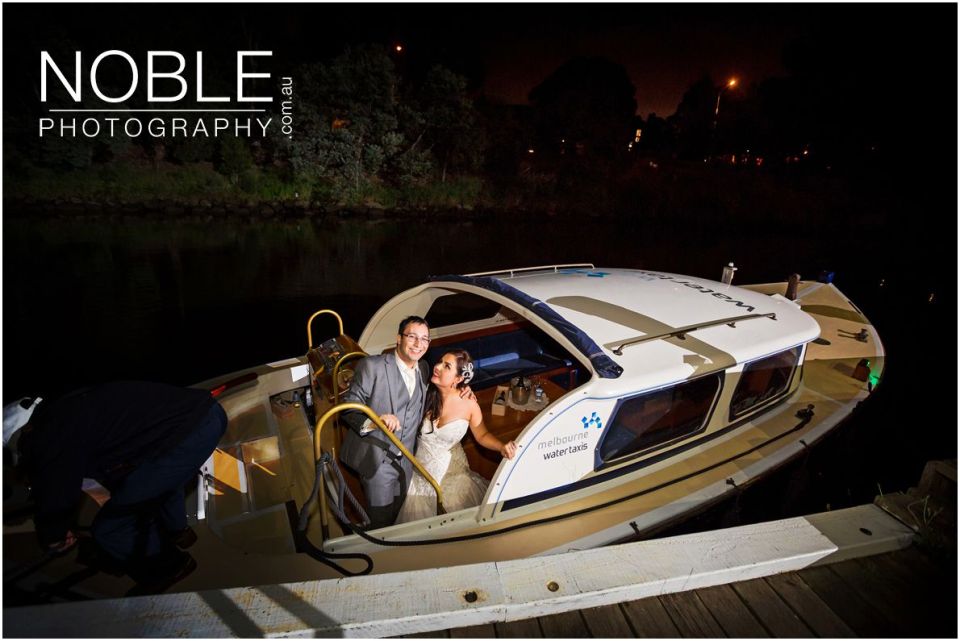 Departing the reception by boat at Leonda by the Yarra

Irina and Jacob’s wedding was an enormous day filled with Jewish tradition, friends, family, a lot of fun, and so much love. I am truly grateful to have been able to capture such an amazing wedding event, and I wish both Jacob and Irina all the best for their future together.
Mazel Tov!

It was great to see Ilana and Paul again at this wedding, I can’t believe it’s been over a year since photographing your wedding!!!